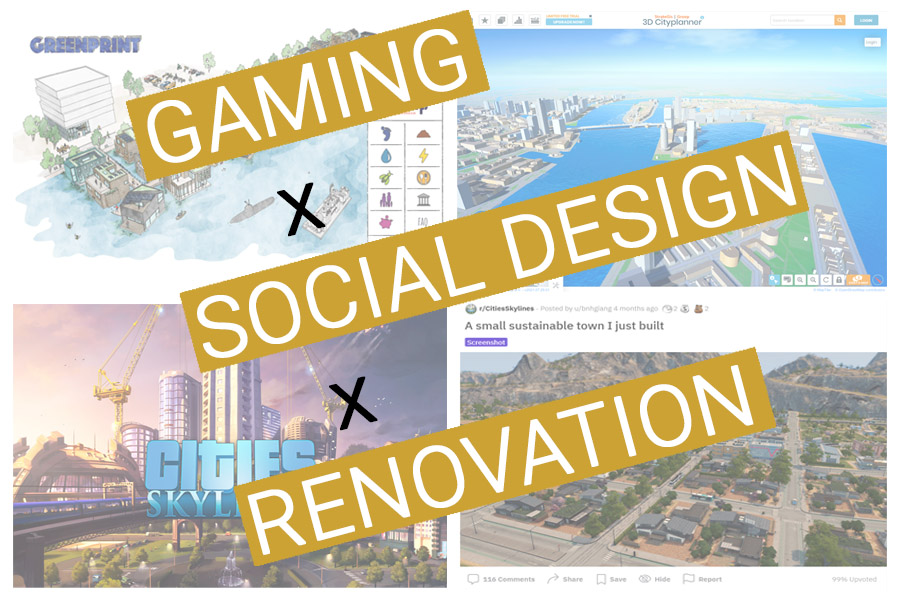 The gaming industry has seen an incredible boost over the past 20 years. This growing appetite for digital experiences has also led to the diversification of what falls under the increasingly fluid category of “video games.” Outside of the typical gunning, e-sports, or strategy games, formats like walking simulators and vast open world games have emerged that demand very different commitments from their players

Although the connection may not seem so evident at first, there is much to learn from the world of gaming (the games themselves but also the player communities that have grown around them) when thinking of radically reducing the carbon footprint of the housing stock and other renovation strategies. Especially when trying to identify innovative means of improving the liveability of our cities or coping with (energy) poverty. Gamers are regularly challenged to rally other players behind a common cause, to take part in meticulous inventory management and optimization. But also to project themselves, imagining the repercussions of their decisions in varying scenarios.

So why write an extensive article on ‘How can gaming culture challenge social design and home renovation?’ For that answer we have to go back a few decades in time.

The neighbourhood in control of there own houses

In the eighties -before the internet became the fuel for modern gaming- the invention of renovation with tenants began. If you try to compare this with how things are done today you’d have a tough time. You really had to be there to understand the difference. Perhaps a comparison with the world before and after the introduction of the mobile telephone is a good example. In the ’80s it wasn’t common for people living in rental houses to have any influence of any kind on the quality of their neighbourhood and home. The owners and government decided what was best for you (and them). For example when the city of Amsterdam decided to build a new metro line through the city requiring whole areas of houses and people to move for this construction, it led to a national protest. In that time there was an all or nothing policy with no position or voice for the people actually living there. In those days there were experts who supported the people living there by making alternative plans that most of the times where better for all parties involved. Later on came the problem that these experts became too expensive because of the demand of plans to be developed for the people living there. Since they were tenants and not professional developers this first wave of participation in neighbourhoods became less popular due to the lack of funds available to support this kind of resource-intensive local planning. One of the solutions was to get the social housing corporations to pay the bills of these experts. Although at first this was a good and functional solution, the people who lived there started to lose their influence on the plans and thus the control over their own neighbourhood.

So let’s jump back forward in time. Today 70% of the housing population is owned by private house owners. These houses are spread across 14 thousand neighbourhoods throughout the whole country. To successfully reduce their carbon footprint they have to organize themselves as a neighbourhood when making plans to renovate their own house. And we all know this is not easy when everybody has their own ideas to add on how it is ought to be done . So again why write an story about the idea how gaming culture challenge social design and housing renovation? Because we think that you’d be surprised how many possible answers the gaming world has to offer for each of these problems. Let’s explore a few.

Perhaps the first game that comes to mind when thinking of city-making and renovations are the Sims and SimCity games. Since their appearance many other games have followed in their footsteps offering different ways of simulating urban activity. The documentary Gaming the Real World offers an interesting outlook on how very different games can each inform how we think of the city and neighbourhoods in very distinct ways: some focus on recreating with high fidelity the ebbs and flow of urban life, often referred to as “digital twins” while others try to offer new kinds of cities all together.

When thinking of computer-aided city simulation, there are several types of games or virtual tools that can be used. These are not “official” categories nor are they mutually exclusive but they help capturing the core intent of each game / tool:

Crafting and building contraptions is present in all sorts of games like World of Warcraft, Call of Duty, Little Big Planet, Minecraft. These will depend on predetermined recipes whose ingredients or components have to be scavenged to then craft the desired object. Perhaps the fact that such game mechanics exists isn’t so surprising if seen as a means of having a “more powerful” character and outperforming others, but it has increasingly become a form of playful exploration, bordering on alchemy, which requires patience, attention to detail, and focus.

This appetite for crafting and the seeking, collecting, and optimizing of the parts required for crafting can lead to very interesting possibilities for the world of restoration and fabrication at large. How can this interest in exploratory making be channelled to renovate our cities? A couple strategies come to mind:

Gaming communities come in many shapes and forms, whether it is fans of upcoming games following the early-stage development of a game on Discord, couples meeting on World of Warcraft, or informal wikis to figure out the best ways to make their way through a level, the virtual spaces in which these take place have very real social networking implications. Through these activities, players get to collaboratively solve problems, prioritize needs, and work toward a collective goal motivated by the love of a game or its world.

Now imagine if this kind of engagement could be harnessed to renovate our neighbourhoods… Where different households would try different products and tell each other about them, where some could easily try out their neighbour’s hacks? Where a few neighbours come together to help each other when a build is very labour intensive? Of course, anyone can find a YouTube tutorial, but how can this process be made into a community building exercise like the many Minecraft maps that have taken groups of players years to build?

Here are several strategies that can be adopted from gaming culture:

Outside of the more utilitarian inspirations to be drawn from the gaming world, there is also an increasing diversification of genres and narratives being offered in the gaming world, including games on renovation, making, and repair. Two games that come to mind are Common’hood and Terra Nil:

Perhaps one of the most disruptive transformations in the gaming sector is the shift towards games that keep growing or evolving. Similar to streaming and other on-demand platform-based services like Netflix, many games have crafted new business models around the seasonal release of new materials. The best known example of this is Fortnite, which offers new skins and content available in their online store at any point of the game. The gaming industry always had patches and expansion packs but here, the updates are far more regular and central to the business model (and available for impulse buys in the middle of the night). This means the game itself, again like Fortnite or Netflix, can be made available for free (becoming a marketplace) and the digital content becomes the core of the business model, like a streaming platform.

Can this kind of platform-based logic help make renovation projects more accessible? Can there be a small fee raised by a neighbourhood that allows for technicians to be on retainer? How can this type of approach be used to encourage repair and not just the purchase of new parts as Amazon does?

This article is meant to openly share the possibilities our team found when exploring the way gaming could reform the rethinking of the renovation sector. It is not a market analysis on gamification trends but an invitation to collaborate and explore this uncharted territory. That being said, we are fully aware of the challenges, not to say dangers, of digitizing just for the sake of innovation, especially when working with individuals’ homes. To be honest we’re not the person to give judgement about what’s right in this world or not. And that is not our goal or purpose of this article. Our goal is to inspire and initiate new relationships between service providers and homeowners and ensure that neighbourhoods have a voice that can be heard as a collective. Because at the end of the day, they are the ones who actually live there. So why not give them a (digital) platform to speak out every day, even when they are not sure what to say about all these complex social themes and sustainable goals? 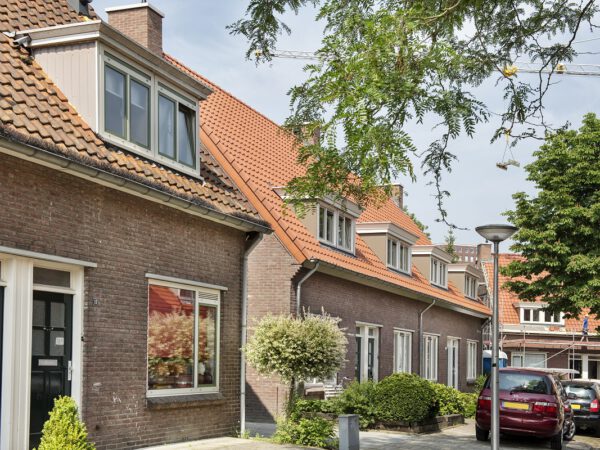 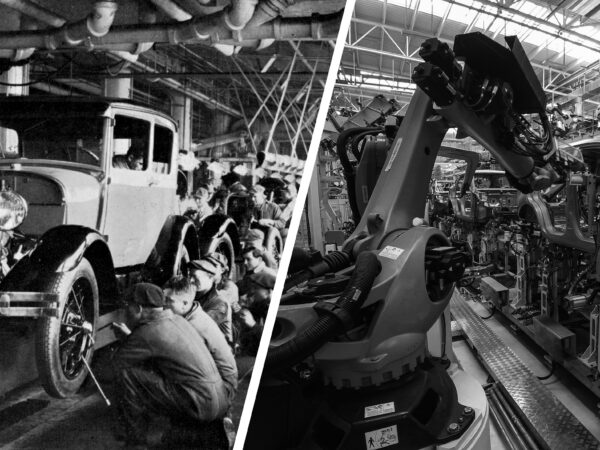 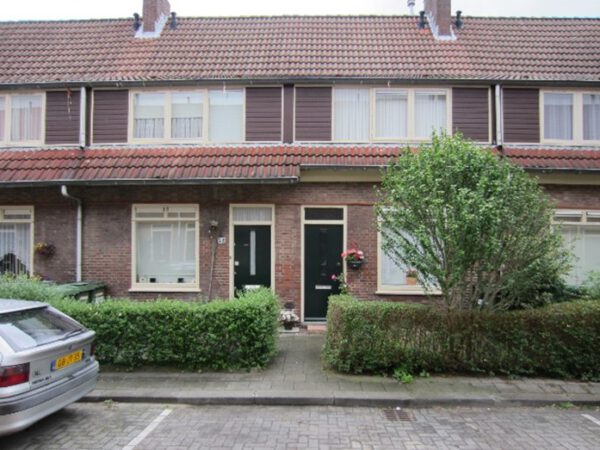